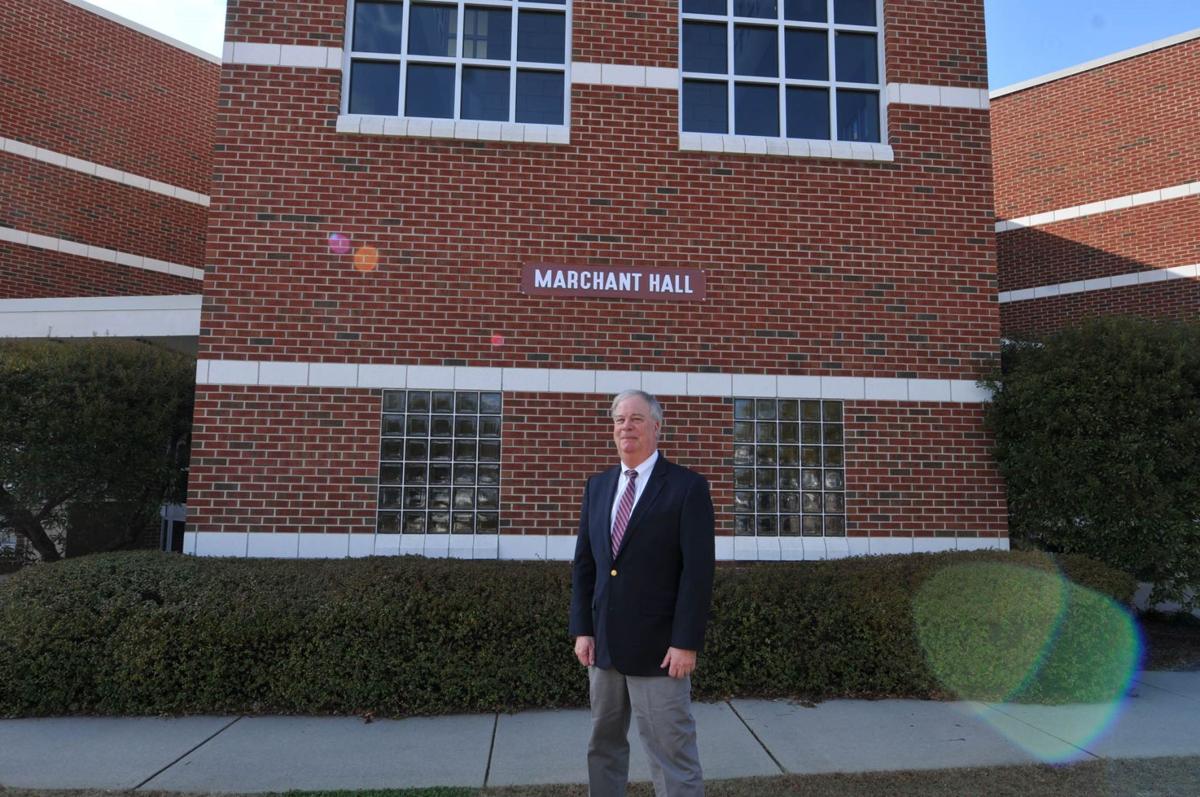 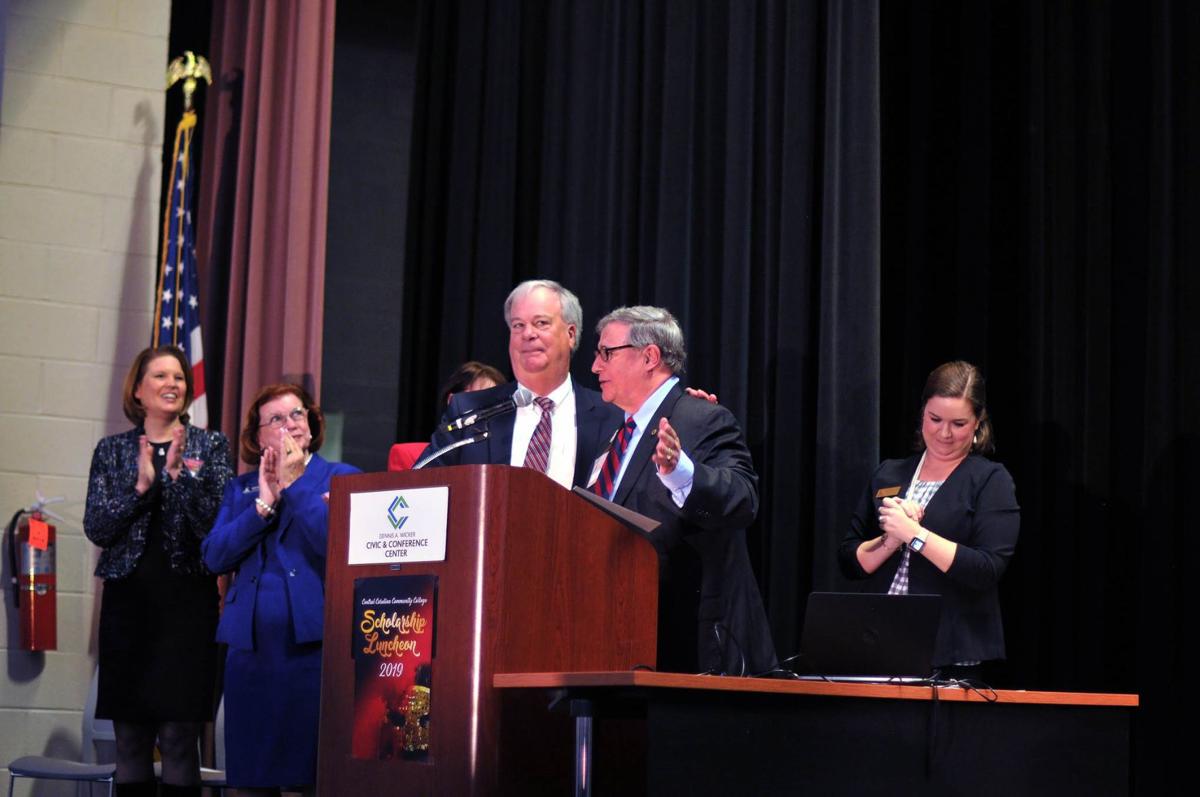 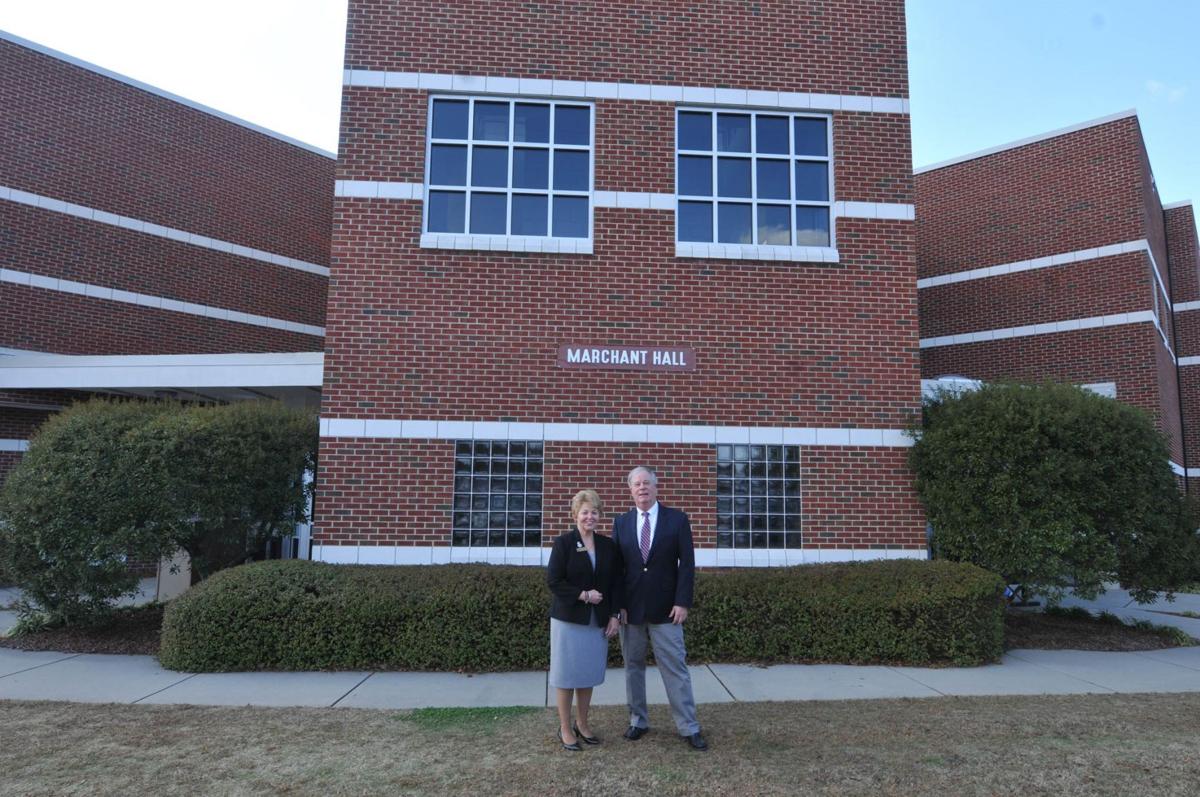 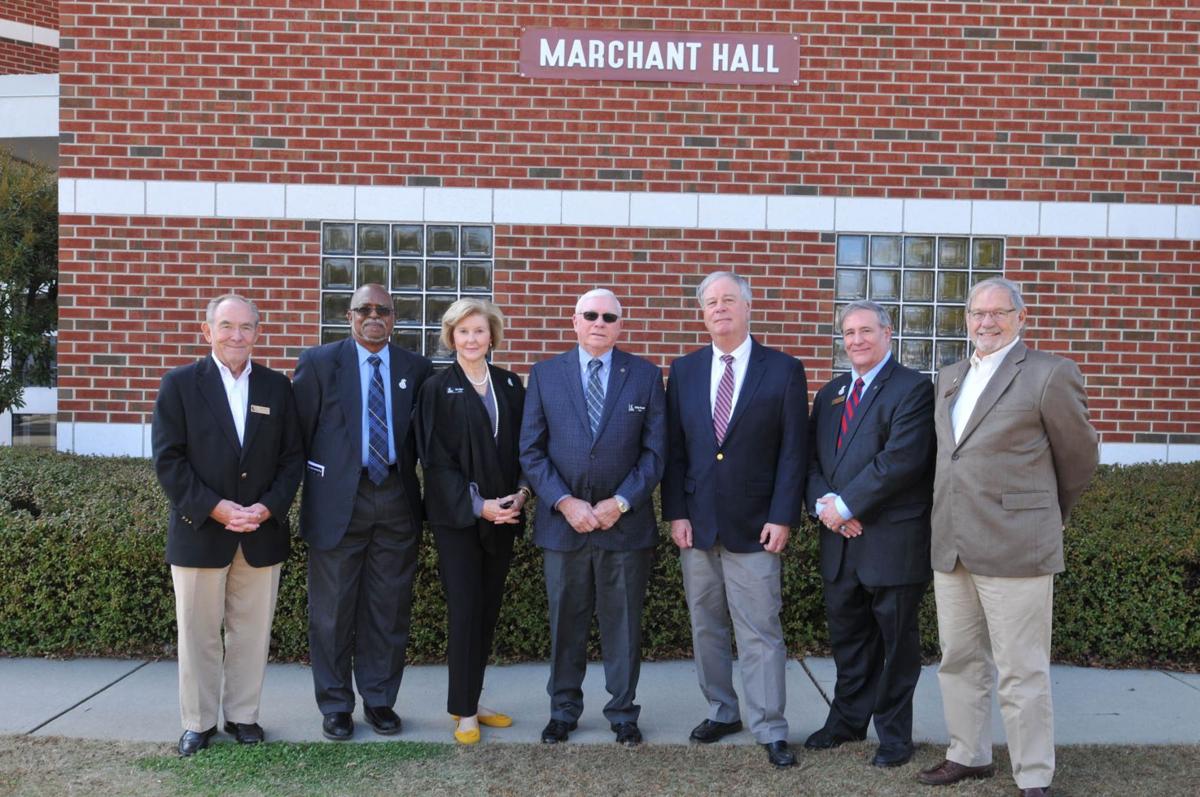 SANFORD, N.C. — The Central Carolina Community College Board of Trustees has named the Science Building on the CCCC Lee Main Campus as Marchant Hall in honor of Dr. T. Eston "Bud" Marchant, who retired as CCCC President on April 1, 2019 and now lives in Clinton

Julian Philpott, Chairman of the CCCC Board of Trustees, said to Marchant during the presentation on Wednesday at the CCCC Foundation Scholarship Luncheon: “It has been said by others that the most important thing in good leadership is truly caring. The best leaders in any profession care about the people they lead, and the people who are being led know when the caring is genuine and when it’s faked or is not there at all. Everyone connected with CCCC knows that you genuinely cared for them, the College, and the communities served by CCCC.

“It has also been said that one’s life journey is about the people who touch you, and that your career when it’s done won’t be judged by the money you made, but by the lives you touched. As an educator and college administrator, you have not only touched lives personally, but you hired other outstanding people who helped to truly transform the lives of CCCC students and positively impact the communities in Chatham, Harnett and Lee Counties.”

Philpott, in making the announcement of the building, told Dr. Marchant: “In grateful recognition of your outstanding leadership and your contributions to the success of CCCC, its administration, faculty, staff and students, the Board of Trustees of CCCC voted unanimously at its October 2019 meeting to name the Science Building on the Lee County Main Campus ‘Marchant Hall.’ This is an honor you did not seek, but it is one that is certainly deserved.”

“This is totally unexpected. This college means so much to me, and the people here are so outstanding in what they do,” said Dr. Marchant. “I deeply, deeply appreciate it and thank you from the bottom of my heart. This will always be a very special place to me.”

Central Carolina Community College accomplishments under Dr. Marchant's leadership were significant. Under his guidance, the college:

-- received the highest possible marks from its SACSCOC decennial accreditation On-Site visit. The SACSCOC Board of Trustees reaffirmed the accreditation of CCCC.

-- was awarded a $9.2 million First in the World grant by the U.S. Department of Education. The four-year grant is the largest in the history of the college.

-- saw continued growth in enrollment during his tenure and the increase in nationally recognized programs, such as CCCC's Veterinary Medical Technology program in Lee County, the Laser and Photonics program in Harnett County, and the Sustainable Agriculture Program in Chatham County.

-- saw continued growth through its Foundation and grants programs.

-- was named in 2010 as one of the Top 50 community colleges in the nation by Washington Monthly magazine.

-- became the first North Carolina community college to be a signatory to the Association for the Advancement of Sustainability in Higher Education's Sustainability Tracking, Assessment & Rating System (STARS).

-- became the first community college in the nation to establish a Confucius Classroom (teaching and learning of Chinese language and culture).

-- launched the 4CNC-TV station in conjunction with county governments to serve the area and provide hands-on experience to broadcasting students.

During his career, Dr. Marchant has received a number of honors, including the 2019 Sanford Area Chamber of Commerce Dedicated Service Award, 2013 Sanford Herald Citizen of the Year, 2008 Citizen of the Year in Clinton, S.C. (named by the Clinton Chronicle), South Carolina Technical Education Association 2005 Administrator of the Year; Phi Theta Kappa 2003 Distinguished College Administrator of The Carolinas Region; Union County, N.C., Chamber of Commerce 2003 Volunteer of the Year; and the Charleston Convention and Visitors Bureau 1998 Tourism Development Award. In addition, Dr. Marchant is one of seven retiring college presidents and chancellors who were honored by the Phi Theta Kappa Honor Society with the Michael Bennett Lifetime Achievement Award.